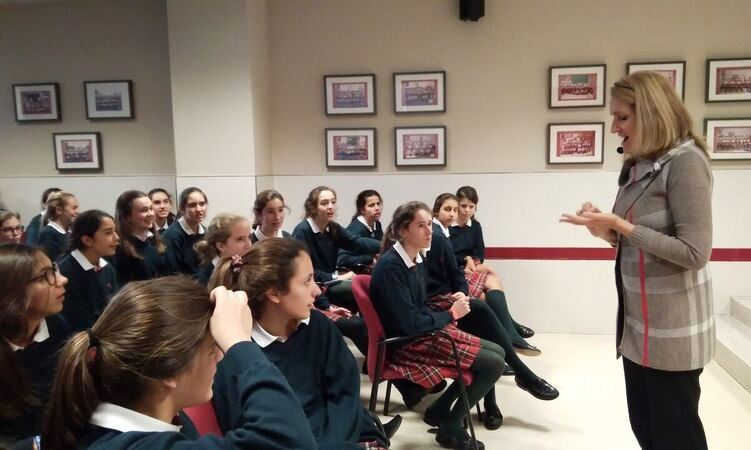 Embassy Speaker Claudia Ellingwood volunteered on November 21st to give a talk on “Winter Holidays In America” at Colegio Fomento-Las Tablas.    Before an audience of 160 female students, she explained how the U.S. winter holiday season, which runs from late November through early January, is when Americans take extra time to gather with family and friends and express gratitude for life’s abundance.  Thanksgiving Day, observed on the fourth Thursday in November, marks the official start of the season.  The approach of Christmas, spurs many Americans even those who are not religious to give to others.  Each year, Americans contribute millions of dollars and millions of volunteer hours to help the disadvantaged during the winter holidays.  Americans are adherents of many faiths, and the U.S. winter holiday season embraces that diversity.  Along with Christians celebrating Christmas Day,  Jewish Americans celebrate Hanukkah, which falls in late November to late December (varying from year to year) and commemorates the rededication of the Holy Temple in Jerusalem more than 2,000 years ago.  Also, each year since 1966, many African Americans have connected with their African cultural and historical roots by celebrating Kwanzaa from December 26 to January 1.   The winter holiday season in America concludes with New Year’s celebrations, with festivities beginning the night before.   Americans, like millions around the world, herald the new year as a time for fresh beginnings, with hope for a better future and resolutions to improve one’s behavior.   On New Year’s Eve,  Americans host parties and attend concerts, fireworks displays, and other special gatherings.  Festivities differ from place to place, with regional variations on well-known customs.