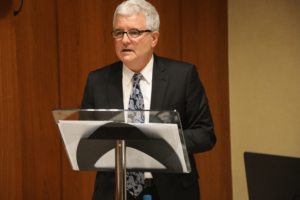 The U.S. Embassy in Madrid participated in the presentation of “Voices of Latin America,” a series of video testimonials from the Cuban, Nicaraguan, Salvadoran and Venezuelan diaspora residing all over Spain, produced by the organization Venezuelan Press. The event was hosted at Asociación de la Prensa de Madrid headquarters.

Conrad Tribble, Deputy Chief of Mission, talked about his experience as a U.S. diplomat in Cuba, highlighting the important role of journalists in the defense of democracy and talked about President Biden’s initiative to back and protect journalists. “One of the biggest challenges we face today is curtailing press freedom and increasing threats to democracy… President Biden has championed protecting the rights of journalists since the start of his presidency”, he stressed.

Representatives from the four countries featured in the videos and a representative of Reporters without Borders discussed the difficulty of doing the work of journalists in their countries, and how they, and in some cases even their family members, had been followed, stalked, and assaulted. They also discussed their decision to leave their countries and come to Spain to continue speaking out about the situation they experienced in their home countries.