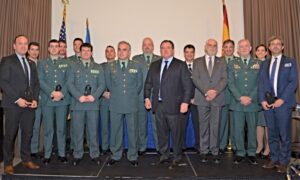 On February 3, 2020, The US Ambassador to Spain and Andorra, Honorable Duke Buchan III, presented the 2019 ICE Director’s Awards for International Achievement to six Spanish Guardia Civil (SGC) officers, one Spanish Anti-Narcotics Prosecutor and three HSI Madrid employees at the US Embassy in Madrid.

On December 5, 2019, two SGC officers along with Senior HSI Representative Thomas Cason traveled to Washington DC and received their awards from the ICE Director.

On October 2018, Spanish Guardia Civil (SGC) officers conducted an enforcement operation, deemed “Operation Bananero”, in Málaga, Spain, which resulted in the seizure of more than 6 tons of cocaine and the eventual dismantlement of a Transnational Criminal Organization (TCO) comprised of Dutch Nationals, who were responsible for introducing large quantities of cocaine into Spain, as well as providing logistics to other criminal groups in other European ports.

Through the investigative efforts and collaboration of the SGC, Spain’s Anti-narcotics Prosecutor’s, HSI Madrid and other law enforcement entities, the operation resulted in the seizure of 6.2 tons of cocaine, 1.3 million Euros, 84 tons of MDMA precursors, 9 firearms, and the arrests of 22 targets in several countries.

The 6.2-ton seizure in Malaga was the largest seizure ever of cocaine made by Spanish authorities and second largest in Europe, resulting in a trail of evidence that allowed the SGC to conduct additional enforcement actions in Spain and the Netherlands. This led to the total dismantlement of the TCO, while assisting Dutch law enforcement with information leading to the seizure of three large synthetic drug labs in the Netherlands, containing 70 kilos of MDMA and 1.5 tons PMK precursors.