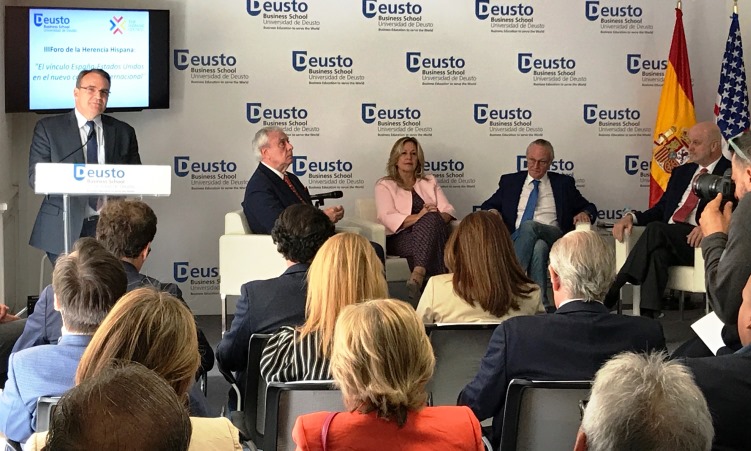 On October 10, U.S. Chargé d’Affaires Benjamin Ziff provided opening remarks at the III Hispanic Heritage Forum (III Foro de la Herencia Hispana), organized by The Hispanic Council and hosted at Madrid’s Deusto Business School.  Since 2015, the Forum has been held to commemorate Hispanic Heritage Month (September 15-October 15) in the United States, in order to draw attention to the many contributions that Hispanics have made to American society and culture.  The theme of this year’s Forum was “U.S.-Spain Ties in the New International Context,” and featured a panel of eminent Spanish representatives including former Foreign Ministers Josep Piqué and Trinidad Jiménez, and former Spanish Ambassadors to the United States Ramón Gil-Casares and Javier Rupérez.

In his remarks, CDA Ziff noted that “Spain’s ties with what is today the United States predate our founding as an independent nation.  In the 2010 U.S. Census, there were over 50 million people residing in the United States who identified themselves as Hispanic or Latino, 16 percent of the surveyed population.  Some of those are descendants of a little-known wave of Spanish migration to the United States in the late nineteenth and early twentieth centuries.  Hispanic Heritage Month encourages us to step back and consider the contributions that Hispanic Americans make to our country and the world more broadly.  We can also explore how the historical bonds among the countries of the Americas and Spain can play a role in resolving today’s common challenges.  An example is how the United States and Spain have cooperated on vital security issues like counter-terrorism.  As NATO allies with a solid defense partnership and extensive law enforcement and security cooperation, the United States and Spain stand shoulder-to-shoulder in confronting the violent extremism that seeks to threaten the peace and tranquility of our free societies.  The United States and Spain can also cooperate to support democratic principles and good governance where they are at risk in the Americas, particularly when fundamental principles of human rights and due process are under threat.”