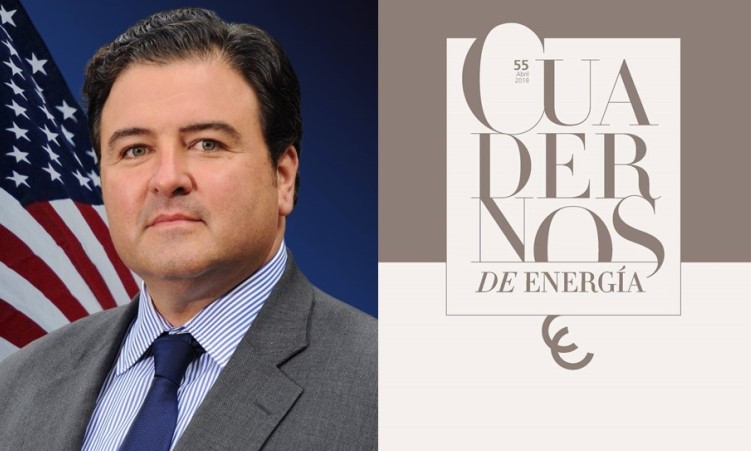 In ten years the United States has effectively doubled its oil production and increased natural gas production by 40 percent.  According to the IEA’s 2017 World Energy Outlook, the resilience of unconventional resources in the United States cements the U.S. position as the biggest oil and gas producer in the world, even at lower prices.  Today we’re producing 775 billion cubic meters of natural gas annually, and according to the U.S. Energy Information Agency, U.S. natural gas production is on its way to nearly 1 trillion cubic meters a year as soon as 2025.

While we once were an importer of LNG, and building import terminals up and down our coasts, we now are an LNG exporter.  In less than two years, more than 260 cargoes have left Cheniere’s Sabine Pass LNG export terminal in Louisiana, reaching more than two dozen countries.  Europe has received a little less than 15% of these exports, and Spain alone has received about a dozen shipments.  A new LNG export facility, Dominion’s Cove Point in Maryland, just started to export in March, and four other large U.S. LNG export facilities are under construction and expected to become operational over the next few years.

These projects represent more than 100 billion cubic meters per year of LNG export capacity that will be fully operational by 2020.  An additional 120 billion cubic meters of LNG has received U.S. Department of Energy authorization for export anywhere in the world.  The United States will be a reliable supplier and will play by market rules.

LNG is a key part of the U.S. government’s “all of the above” approach to energy, which has five priority areas:

We believe that these five actions will help the United States provide dependable and diverse supplies of energy to our partners and allies around the world, to ensure their national security, and drive economic development.

The United States believes that a combination of technology and free markets are the best way to increase energy access at a lower cost to a greater number of people.  As Europe seeks to fully implement the EU’s Third Energy package and diversify its energy supplies, the United States is working closely with our partners throughout the continent to help develop their energy infrastructure.  We support projects that would increase diversity of supply to Europe, such as the Southern Gas Corridor, the Interconnector Greece-Bulgaria, and LNG import facilities, such as the proposed Floating Storage Regasification Unit at Croatia’s Krk Island.

We oppose projects that would weaken Europe’s energy security, such as the proposed Nord Stream 2 as well as a multi-line Turkish Stream—one that would facilitate additional Russian gas exports beyond Turkey’s domestic market.  These projects would do nothing to enhance Europe’s energy security.  In fact, they would increase Russia’s market power and ability to use energy as a weapon.  Together with the existing Nord Stream 1 pipeline, Nord Stream 2 would channel two-thirds of Europe’s gas imports from Russian through a single, vulnerable corridor.

Spain and Portugal, which have underutilized LNG import facilities and massive potential for solar and wind energy, form a natural energy hub and can be great partners to help bring greater diversity of supply of natural gas and electricity to Europe.  We encourage Spain to work with its neighbors to improve interconnections with the rest of Europe, including EU Projects of Common Interest such as the Bay of Biscay electricity interconnection and Spain-France natural gas infrastructure.  We will continue to work with the Spanish government and Spanish energy companies on ways to strengthen European energy security and increase energy access across the continent.