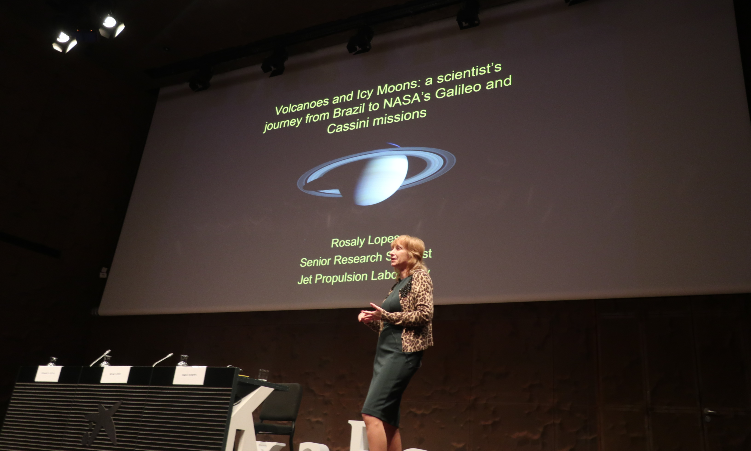 The U.S. Embassy in Madrid partnered with the CaixaForum to host Dr. Rosaly Lopes, Senior Research Scientist at NASA’s Jet Propulsion Laboratory, on September 26.  During Dr. Lopes’ presentation, “Volcanoes and Icy Moons: A Scientist’s Journey from Brazil to NASA’s Galileo and Cassini Missions,” she discussed her personal journey from a young student to a planetary geologist and volcanologist and explained how she discovered 71 active volcanoes on Jupiter’s volcanic moon Io, which eventually landed her in the 2006 edition of the Guinness Book of World Records.  Dr. Lopes noted the benefits she received from pursuing degrees in STEM fields (Science, Technology, Engineering, and Mathematics) and encouraged the students in the audience to pursue their dreams.  Included in the audience were the eight Spanish teenagers awarded scholarships by the Embassy in 2019 to attend Space Camp in Alabama and receive training similar to NASA astronauts.  To celebrate the 50th anniversary of the Apollo XI moon landing in 2019, the U.S. Embassy in Madrid has organized events and speakers, such as Dr. Lopes, who demonstrate to young people that there are no limits to what you can achieve through education, commitment, and creativity.