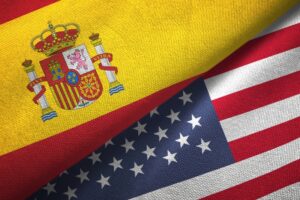 SECRETARY BLINKEN:  Well, good – good morning, everyone.  It’s a particular pleasure to welcome my friend, Foreign Minister Albares, to the State Department, to Washington.  We’ve managed to spend a fair bit of time together these months in various places around the world, but it is especially good, José Manuel, to have you here in Washington.  This meeting, all of our conversations and meetings, are I think evidence of the incredibly close partnership and relationship that the United States and Spain enjoy.  Spain is a remarkably steadfast partner and ally to the United States, in NATO of course – and we look forward to you hosting a very (inaudible) summit in a few months’ time for the Alliance – but also beyond, besides issues of security in Europe, in particular the situation in and surrounding Ukraine right now.  I know that we look forward to talking about the many different issues that we’ve focused on together, including in Africa, the Sahel, but also in Latin America.

There is a lot to talk about, but beyond that I just want to say that, especially in challenging times, as these are, it makes all the difference in the world to have close partners, close friends, and close allies like Spain.  For the United States, nothing is more important.  So it’s very good to have you here.

FOREIGN MINISTER ALBARES:  Thank you very much, Tony.  I really appreciate the effort you’ve done in the middle of this Omicron crisis in which contacts are very complicated on the eve of you leaving to Europe, and we wish you the best luck.  And we will be behind you with all the allies.

The United States and Spain have historical, cultural, political, and economic ties.  We have a good friendship and a good partnership.  And this visit is proof of that and will reinforce even more that relationship.

We are going to discuss, as the Secretary of State has pointed out, the current situation in Ukraine.  Our position is very clear: the respect of the sovereignty and the territorial integrity of Ukraine, including Crimea.  And we consider the United States as a very good partner, a good friend, and also the natural ally of Europe.  And we are going also to talk about that and different scenarios – the Sahel, Latin America, and also joint initiative in multilateralism in which we both believe deeply.

SECRETARY BLINKEN:  Thank you.  Thanks, everyone.