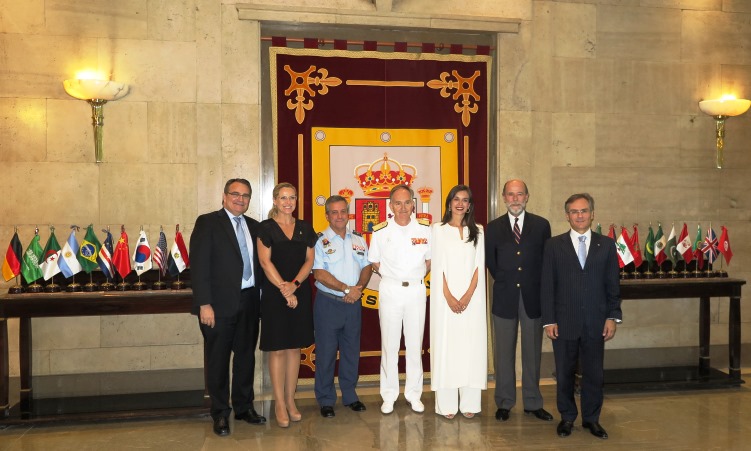 Let me start by congratulating the Youth Atlantic Treaty Organization of Spain for your extraordinary work organizing this dialogue.  Your group has played an important role for over 20 years promoting a deeper understanding of NATO and of the international security environment.  Thank you for supporting NATO’s Mediterranean Dialogue Initiative and bringing so many young people together from across the region.  And thank you to our friends at CESEDEN for hosting us.

As I look around the room today, I am deeply impressed by all of your keen interest in international affairs and your spirit of regional cooperation.  The voices of young people are so important in debating our foreign policy challenges.  The policy decisions we make today will shape your lives for decades to come, so your participation in the debate is critical.  Wherever your careers and studies may take you, I hope that you remain actively engaged in these issues, finding new and innovative ways to contribute to international dialogue.

This dialogue brings together representatives from every side of the Mediterranean because we all share a common future.  The security challenges of the 21st century – whether terrorism, cybercrime, or nuclear proliferation – affect us all.  These challenges do not recognize borders and they do not stop at the edge of any sea.  To overcome them, we will need to work together and strengthen the security architecture that was built and maintained by those who came before us.   NATO, the strongest and most successful military alliance the world has ever known, is a critical part of that architecture.

Spain adds extraordinary value to NATO, especially through its contributions to ongoing missions in the Baltics, the Mediterranean, Turkey, and Afghanistan.  And the commitment of the United States to NATO is ironclad.  As the new American ambassador to NATO recently wrote, “Congress and the Trump administration believe that an alliance of 29 Western democracies is far more effective at ensuring our security than one country acting alone.”  In the decades since its inception in 1949, NATO has always been able to adapt and grow to meet new challenges.

Today, NATO can serve as the foundation for an expanded partnership with North Africa to project stability and ensure that the story of the 21st century is one of expanding peace, prosperity, and international cooperation.

It is fitting that we have this dialogue on this day, September 11.  Sixteen years ago, as the American people mourned the deadliest act of terrorism in our country’s history, our NATO allies rallied to our side.

For the first time in NATO’s history, Article Five of the treaty was invoked and NATO mobilized to secure the collective defense of the alliance against Al-Qaeda and its accomplices.  Today, NATO remains a key actor in our fight against terrorism.  NATO is standing up a counterterrorism intelligence cell which will be fully operational by the end of this year.  In May, NATO formally joined the Global Coalition to defeat ISIS.  It is providing essential support in the fight, including aerial surveillance flights.

The Global Coalition today consists of 73 countries, including every NATO member state and our Mediterranean partners Morocco, Tunisia, Egypt, and Libya.

Thanks to the service and sacrifices of all the coalition members, the military campaign on the battlefields of Iraq and Syria is making significant progress.  ISIS has lost more than 70 percent of the territory it once controlled in Iraq, and more than half of its former territory in Syria.

Together, our partners in the region will liberate all of the remaining territory and help civilians return to their homes and begin rebuilding their lives and their communities.  In this area, I want to applaud the brave service of Spanish soldiers and police, who have trained 30,000 members of the Iraqi security forces, including the units that helped to liberate Mosul earlier this year.

We have made extraordinary progress in the fight against ISIS, but we can and must do more.  The tragic and senseless attacks in Barcelona and Cambrils last month demonstrated once again that the threat posed by terrorist groups like ISIS is not restricted to any foreign battlefield.  It requires innovative approaches to counter online efforts to manipulate and radicalize our youth.  It requires the spirit that we saw in Barcelona, and across Spain, in the aftermath of the attacks – the spirit of “no tinc por,” “no tenemos miedo,” “we are not afraid.”  It requires constant vigilance and strong international cooperation.

This dialogue embodies that spirit of cooperation, uniting young people from different regions and religions to seek common solutions to our shared challenges.   The topics you have chosen are a sign of the wisdom that you already possess as young leaders.  As we maintain our deterrent capabilities to provide our Eastern European allies with the support needed to safeguard their freedom and security, we must also expand our efforts to address the challenges in the Mediterranean and expand our cooperative security efforts in North Africa.

These cooperative security efforts should form part of a comprehensive approach to helping our partners throughout the Middle East region confront the threat of terrorism and protect their populations from attacks and from radicalization.

In conclusion, I look forward to your advice on innovative ways that NATO, and our Mediterranean partnership, can help build a safer and more secure future.  I wish you the greatest success during this dialogue, and look forward to working with you to translate your ideas into action.  Thank you very much.