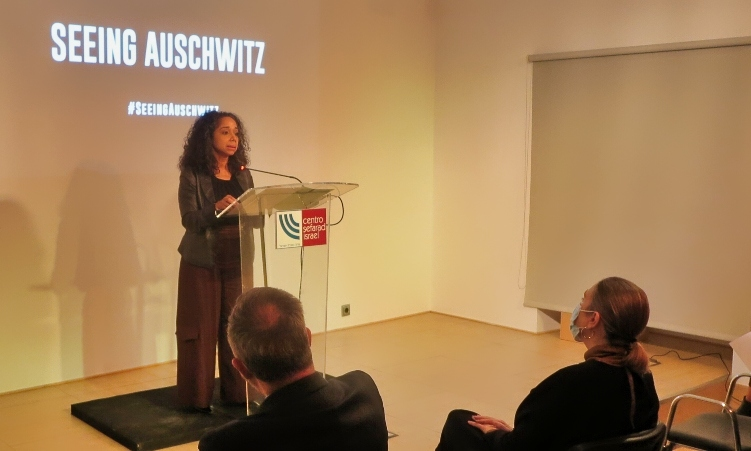 Thank you, Miguel, and thank you all for your important words. I just arrived in Spain last week to represent President Joe Biden and the American people.  As someone who has a long history of work in social justice, I think it is fitting that one of my first events as U.S. Ambassador is here with this group.  I know how important the work of Casa Sefarad is in elevating Spaniards’ knowledge about their country’s Jewish heritage, in educating future generations, and building cultural connections.  Above all, I recognize the important part the Center plays to make sure the Holocaust is never forgotten.  So, it is an honor, as well as a solemn duty, to participate in this important event with the Centro, along with so many important figures of the Jewish community, members of the international community, and representatives of the community of Madrid.

Ensuring that the horrors of the Holocaust are never forgotten is a priority for the United States, not only because of what it says about our past, but because of what it means for our present and our future.  As Secretary of State Antony Blinken said last October at the Malmö International Forum on Holocaust Remembrance and Combating Antisemitism, “The United States is committed to remembering and fighting Holocaust denial, anti-Semitism, and hatred in any of its modern forms… because the dangers of the Holocaust are not simply problems of the past.”

Anti-Semitism is unfortunately on the rise in many parts of the world, including the United States, and we still see hostile acts around the world far too regularly.

Disinformation and lies, including Holocaust denial, continue to threaten open societies.  The ability to witness, study, and reflect on truth and facts—and have dialogues about our histories based on a common understanding of reality—is essential to the survival of democratic society and peace in our world.  We must ensure that the next generations have the right tools to combat hatred, which is inflamed by falsehoods, sensationalism, and disinformation.

Those who engage in denial want to blur the line between truth and lies, and provoke hatred not just against people of Jewish heritage, but drive a wedge between our societies, attacking immigrants and refugees, ethnic and racial minorities, LGBTQI+ people, and others.

The members of the U.S. military and other Allied forces bore witness to the devastating reality of the concentration camps.  Those soldiers understood that the liberation came far too late and rescued far too few.  In addition to burying the dead, the Allied forces attempted to help and comfort the survivors with food, clothing, and medical assistance.  What more could they do in the face of such suffering?  They could share their stories, tell the world the truth of what they saw.  And they did so, marking down personal testimonies that will live on for posterity in places like the National Holocaust Museum in Washington.  Their accounts, recorded in the form of official unit histories, personal statements, and oral testimonies, provide an important resource in the study and understanding of the Holocaust.

Centro Sefarad-Israel plays a critical role in documenting similar accounts through seminars, conferences, debates, workshops, exhibitions, concerts and tributes to the victims. They also put on specific training programs and trips to the camps for teachers in Spain. I want to commend similar work being done by other partners represented here today.

Now it is up to all of us as individuals, as collectives, as governments.  We all must keep alive the flame of remembrance as a fundamental tool to combat the hateful messages that today we see articulated around the world.  Collectively, we must stand up to those whose aim is to use force to usurp territory, to bully weaker neighbors, or whose goal is to squash dissent wherever it arises.

The United States was the destination of many of the survivors who emigrated in search of a new life after the Holocaust.  As an immigrant to the United States myself, growing up in the Bronx, I know as well as anyone that our diversity is a strength, and inclusion is a fundamental cornerstone of a well-functioning society.  Those survivors and their descendants contributed greatly to American society, as did all Jewish-American immigrants.  Poets, inventors, doctors, researchers, playwrights, artists, publishers, entrepreneurs… generations who have enriched and strengthened the social fabric of the United States.  We honor those generations and their contributions to our country.

In closing, I will quote Secretary Blinken once again, who said: “In our policies and programs, our priorities include condemning and countering anti-Semitism, ensuring the physical safety of Jewish communities, supporting Holocaust education, especially among youth, protecting religious freedom, and urging countries to engage more deeply in the fight against hate speech in social media and in all its forms.  Remembering the Holocaust, fighting anti-Semitism, these are not passive activities.  They require action.  They require commitment.  We must use our power to create a more just world. “

I thank all of you here today for doing just that… using your power, using your voice, to create a more just world, a world that never forgets.

Thank you very much.