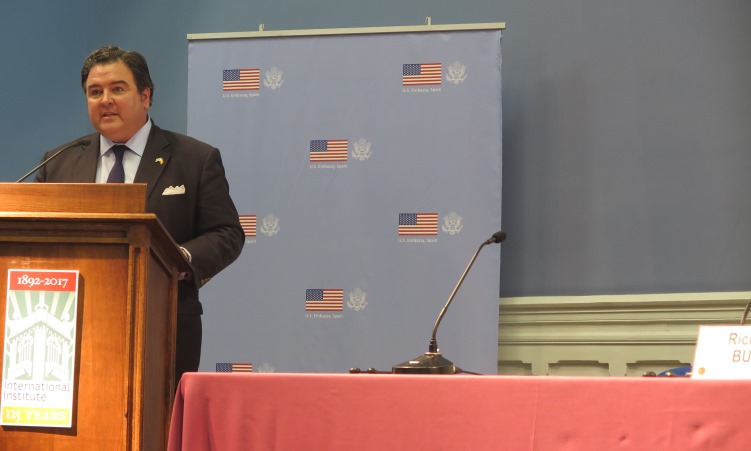 Ladies and gentlemen, good morning.  I am delighted to be with you today.  Welcome to the Royal Elcano Institute and U.S. Embassy seminar.  I would like to thank President Emilio Lamo de Espinosa and his team.

I am also very pleased that Manisha Singh is here from the State Department today.  I also welcome María Luisa Poncela from the Spanish Ministry of Economy.

The theme of the first seminar was security and defending our values around the world.  It was a great forum on a vital issue. The same is true for today’s theme, and it one that is very close to my heart:  business.

I have spent three decades as a global investor.  I have earned millions of frequent flyer miles traveling to over 50 countries to do business.  I know Spain.  I first came here 40 years ago as a student in Valencia and Seville, and I have been back many times on business.  Our two countries are partners.

The economies of Spain and the United States are growing.  Here are some highlights:

The U.S. stock market has risen nearly $7 trillion over the past 16 months.  Why?

Second, tax reform.  Recently we have seen some impressive public announcements by Spanish companies.  The value of Iberdrola’s investments in the U.S. increased by over 1.2 billion euros in 2017.  Grifols saw an increase of 171 million euros.  This is not “chump change!”

The message is:  America is open for business.

U.S. firms have played an important role in Spain’s recovery.  Blackstone and Cerberus have invested over 10 billion euros in Spain.  Ford announced in November that they would invest 750 million euros in Valencia.  We expect they all will result in more job creation.

Both our countries are benefitting from the current situation.  We can and must take advantage of these opportunities.  Let’s do it together!

One such opportunity will take place in June, when I will lead a delegation of Spanish companies to Washington, DC for the SelectUSA investment forum.  SelectUSA is the premier event for facilitating investment in my home country and a terrific venue for doing business.

The United States could not have a better partner than Spain.  We are united by history and common values. We must capitalize on this moment.

Let me say it again:  America is open for business.  Let’s prosper together.