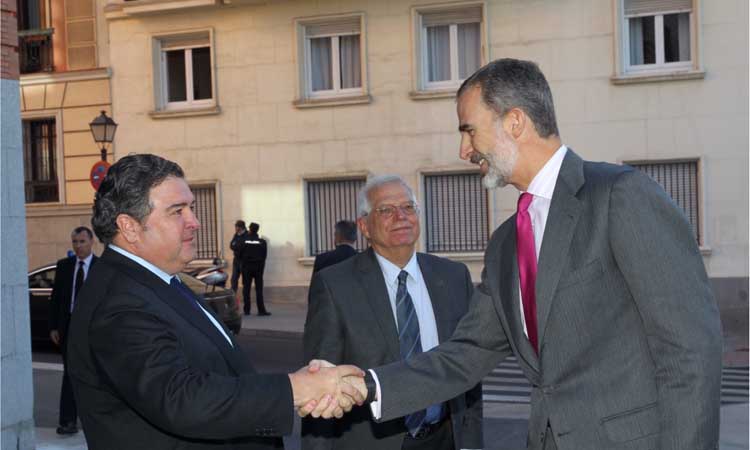 As Ambassador, I oversee our diplomatic relationship.  I help advance our most important economic and security goals.  Even so, I recognize that governments come and go, and policies change.  The ties between our peoples go far beyond politics and the economy.  And I’m not talking about soccer and Spanish ham!  And there is no better way to increase affection between our peoples than through educational exchange.  Abraham Lincoln said that “education is the most important subject which we as a people can be engaged in.”  I did that and am living proof.  I first came to Spain as a student in Valencia in 1980, nearly 40 years ago. I returned to study in Seville three years later.  But there was a lot of partying too.  All Spanish education and culture! That experience changed me for good. I fell in love with Spain forever, who wouldn’t?  As an adult, I came back to Spain with my family many times.  I founded an exchange program that, among other things, brings Spanish and American students together.  What I did on a small scale is what Fulbright has been doing on a large scale for 60 years now.

I’ve just become aware of a very deep, very powerful word in Spanish: guiri. I’m a guiri… But almost Spanish too. And, as a ‘guiri’ in Spain I can confirm that the Fulbright program truly brings our two countries together. We can see the results of Fulbright here in this room. It’s all of you. Hundreds of grantees young and old. But Fulbright isn’t about its first 60 years. It’s about the future. Right now, the program is sponsoring 288 young people, teachers, researchers, post-graduate students, 134 in the United States and 154 in Spain.  These impressive figures are evidence of tremendous commitment on the part of the U.S. and Spanish governments.  I would like to give recognition to the contributions of corporate  sponsors to the Fulbright program.  Their long-term commitment to education is evident in their generosity to the Fulbright Program.  Now the companies!

Fundación MAPFE – One scholarship per year.

Coca-Cola España – One scholarship per year.

Cosentino – One scholarship per year.

Hewlett Packard-España – One scholarship per year.

Thank you all for your continued commitment.  You have set an example that I hope others will follow.

As you can tell, I’m a big fan of the Fulbright program.  It has stood the test of time for one simple reason: it works.  Minister Borrell is proof of that.  He went to Stanford in California.  With our continued support, I have no doubt that the Fulbright program will continue to prosper.  See you in 10 years for the 70th anniversary!  Thank you.