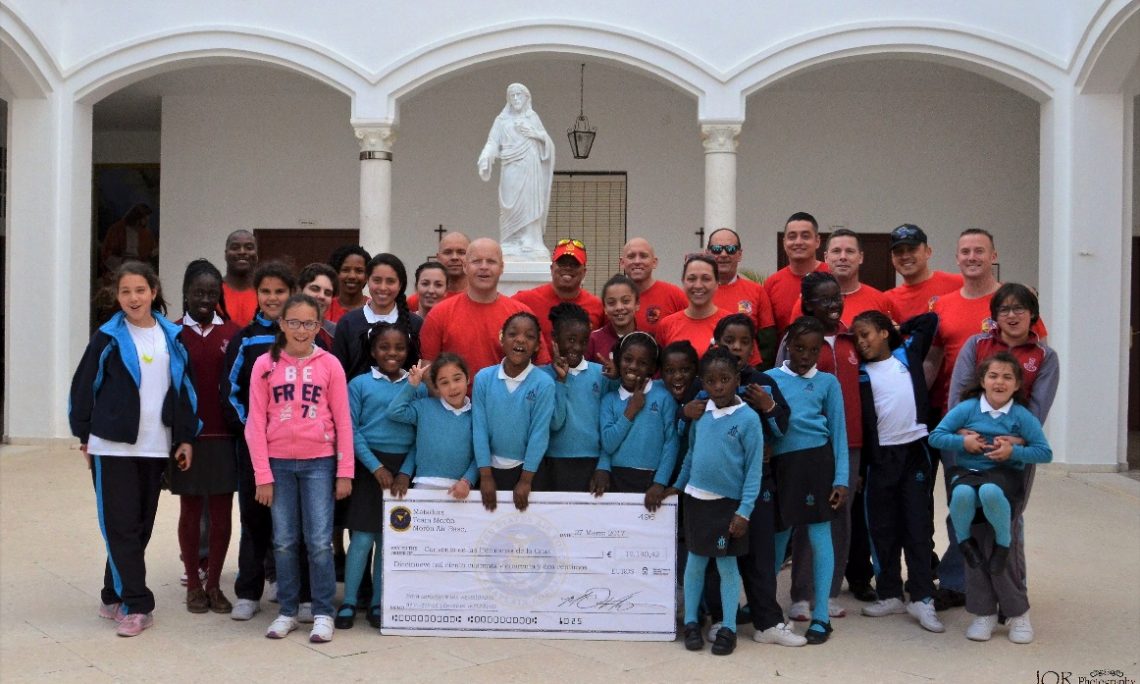 The Orphans (our mini-matadors) from the Sisters of the Cross Convent hold a check for 19,140.42 euros. Donated funds will be used to pay for school uniforms and future orphanage expenses. (Capt Jose Quintanilla courtesy photo)

Through a series of “Miraculous Coincidences,” the efforts of the Air Force Chaplain Corps Religious Support Teams under the leadership of both 86 Airlift Wing Chaplain, Col Donnette Boyd and 496 Air Base Squadron’s Group Chaplain, Capt Chaplain Ronald Feeser, military members from both Morón and Ramstein Air Bases were provided the opportunity to donate to a designated offering held at both installations on 27 March 2017 in support of the Sisters of the Cross Convent in Morón de la Frontera, Spain, caring for 29 orphan girls.  “The response by the parishioners was overwhelming,” stated Ch Feeser as Morón AB raised $3,748 in the Protestant and Catholic services.  At Ramstein AB, the Kaiserslautern Military Community collectively raised $16,901.  “It is the largest offering I’ve seen since I’ve been at Ramstein,” said Ch Boyd upon notifying the 496 ABS Commander, Lt Col “Super Mario” Verrett.

Lt Col Verrett was extremely happy with the results and highlighted the selfless actions of one of his squadron’s local nationals, Mr. Jose Manuel Morón, a TMO representative, who is a well-known citizen of the town Morón de la Frontera where the convent is located.  “We call it ‘Miraculous Coincidences’ because of the fact that this venture would not haven’t been possible but for the critical link between our TMO rep and the 725 Air Mobility Squadron/Detachment 1 commander, Capt Jose Quintanilla.  It was 14 years ago that they both met here at Morón AB when then SSgt Quintanilla was deployed in support of Operation ENDURING FREEDOM.  Both of them struck a cordial friendship through the years which has culminated in outstanding support to the local community today.

Throughout the years, Mr. Jose Morón has shown a devotion to his community and represents one of the greatest qualities that any human being can possess—empathy,” said Lt Col Verrett.  “It is through persons like him that the military is able to create close ties with our local communities and demonstrate that we, too, have a stake in their wellbeing.”

Without question, this “Operation MIRACULOUS COINCIDENCE” will go a long way into funding the CY ’18 school uniforms for 29 young girls and will provide for other expenses.  The Matadors of Morón AB are committed to ensuring an enduring positive presence within the local community in the years to come.

In the words of Ch Boyd, “It’s safe to say that Operation MIRACULOUS COINCIDENCE was a success!”.