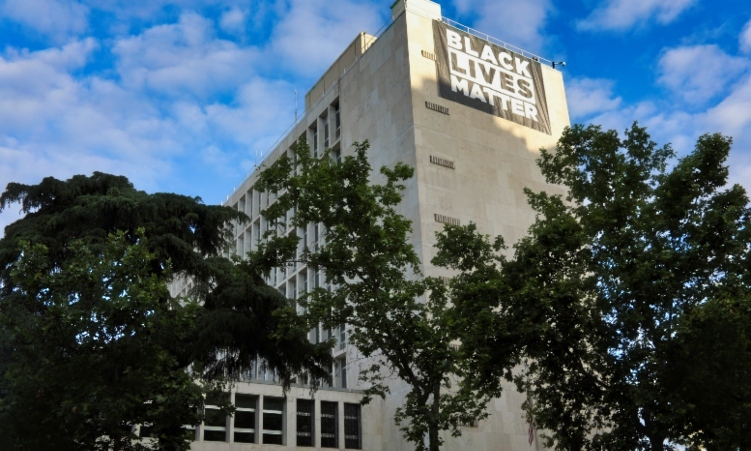 The U.S. Embassy in Madrid displayed a banner today on our building’s façade affirming that Black Lives Matter

MADRID May 25, 2021– To mark the one-year anniversary of the murder of George Floyd, and to stand in solidarity with members of Black communities in the United Statesand around the world, the U.S. Embassy in Madrid displayed a banner today on our building’s façade affirming that Black Lives Matter.

George Floyd’s murder sparked a reckoning with racial justice and a constellation of movements around the world calling for the end of raciallymotivated violence and discrimination. One of President Biden’s first official acts in office was to issue Executive Order 13985 to advance racial equity and support for underserved communities. The Embassy’s display of the banner is a statement that racism has no place in our world. It is also a public acknowledgement of the injustices people of color have historically faced and continue to endure, and of our commitment to advance racial justice,equity, and inclusion in our domestic and foreign policy.

Upon raising the banner, Chargé d’Affaires Conrad Tribble said “Conversations about race areseldomeasy, but they are important and necessary. On this sad anniversary, we must make a clear statement that every human being is entitled to live freely and without fear of discrimination or violence.The United States has a long history of dealing withtraumas like this one by pushing forward positive change. As we do so, we must acknowledge the reality that the United States is still a work in progress and there is still much work to be done.”

Members of the Embassy community will participate in nine minutes and 29 seconds of silence to honor the lives of George Floyd and others who have suffered from racism. During this silent period, community members were invited to recommit to a shared purpose in advancing positive change together as individuals, as a diplomatic mission, and as a country.