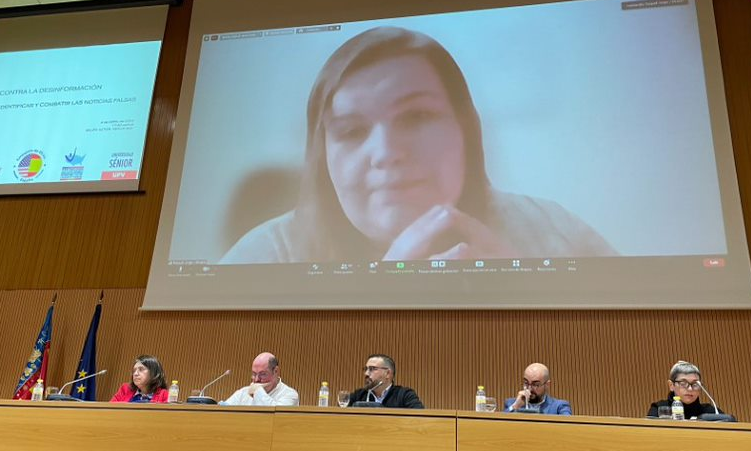 On April 4, the VIA-Círculo Jefferson Association  organized its second session of the “Conference against disinformation” series at the Polytechnic University of Valencia.  Attaché for Agricultural Affairs at the U.S. Embassy in Spain, Karisha L. Kuypers, opened the event, together with the Vice President of VIA-Jefferson Association, Miguel de Oyarzábal, and the Vice Rector of Art, Science, Technology and Society of the Polytechnic University of Valencia, Salomé Cuesta Valera, who noted the importance of knowing the many tools available to discern true news from false news.  In her remarks, Attaché Kuypers noted how disinformation has had series negative consequences, for example, on the debate surrounding genetically modified foods, and how a general lack of knowledge about the subject allowed disinformation to spread.  Roger Cuartielles, Learn To Check disinformation expert and professor of communication at the University of Barcelona, then gave a workshop on how to verify the veracity of photographs posted on the Internet.  Seventy-five participants attended the conference in person and more than a hundred watched online.

The recording of the event is available here. This was the second of five conferences designed to counter disinformation organized by VIA with the sponsorship of the State Department’s Alumni Engagement Innovation Fund-AEIF.  The U.S. Embassy in Madrid, the U.S. Consulate General in Barcelona, and five senior university members of the Association of University Programs for the Elderly throughout Spain have collaborated on the series.  The third session of this series will take place in Bilbao on May 3, 2022 and will focus on the theme “Consumer Disinformation”.