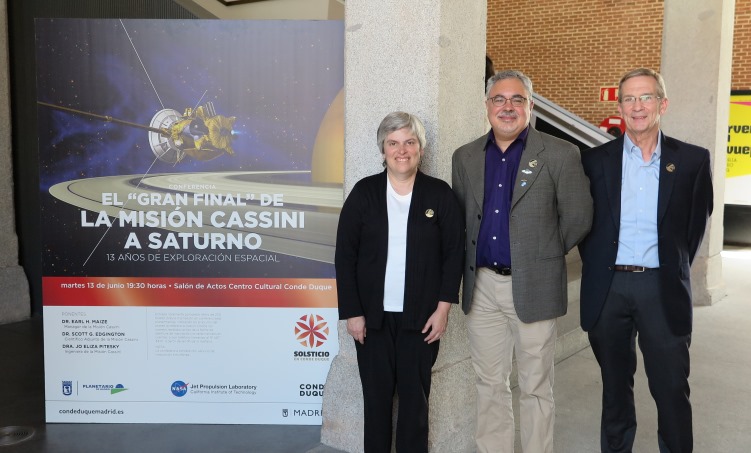 On June 13, 2017, Dr. Earl Maize, Dr. Scott Edgington and Dr. Jo Pitesky of NASA spoke about the “Grand Finale” of NASA’s Cassini Mission. The discussion, which was held at Madrid’s Conde Duque Cultural Center in collaboration with Planetario de Madrid, the U.S. Embassy in Madrid and NASA Jet Propulsion Laboratory, drew 250 participants and was broadcast via Facebook Live to an audience of nearly 20,000 viewers. Dr. Maize, Dr. Edgington and Dr. Pitesky highlighted Cassini’s many notable discoveries, including the discovery that Saturn’s moon Titan is an Earth-like world with rain, rivers, lakes and seas. The speakers also discussed the importance of international cooperation in missions such as Cassini, particularly the role of the Madrid Deep Space Communications Complex. After 13 years orbiting Saturn, Cassini will dive into Saturn’s atmosphere on September 15, 2017, sending back valuable data to Earth one last time before finally becoming a part of the planet it has so long studied.