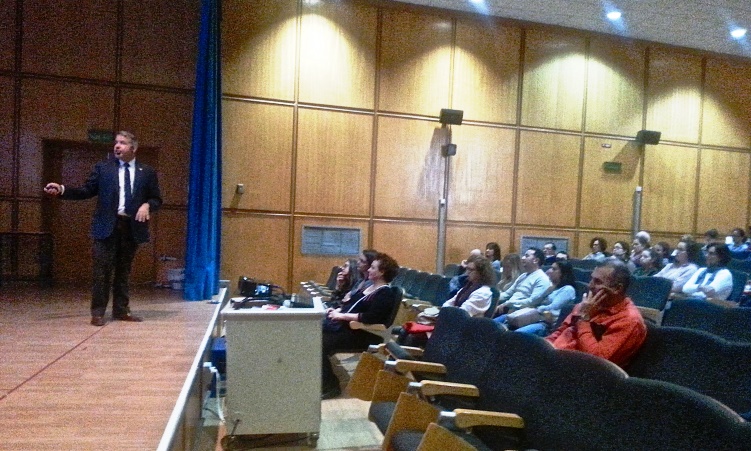 On Tuesday November 21st  and Wednesday November 29th,  Deputy Cultural Attaché Ryan Matheny lectured at the “Escuela Oficial de Idiomas of Malaga” and the “Escuela Oficial de Idiomas Moratalaz” in Madrid, respectively, for audiences of adult English language learners.  The Escuelas Oficiales de Idomas –EOIs (Official Schools of Languages), a unique Spanish institution created in 1911, are a network of public languages schools, subsidized by the autonomous regions and present in most Spanish cities.  Their student body ranges from 16-year-olds, studying after regular school classes, to highly motivated adults.   EOIs offer instruction in 22 different languages, although English attracts the majority of the students.

Using photos and a map, Matheny shared the meaning behind some of the most iconic monuments, memorials, museums, and government buildings on and around Washington D.C.’s National Mall, and how they symbolize and embody the United States’ history, its founding principles, and its democratic values.  He explained how the U.S. Constitution separates and balances the powers of the three coequal branches of the federal government (Legislative, Executive and Judiciary) and explored specific chapters of U.S. history, including Native American civilizations, the colonial period, the American Revolution and founding of the Republic, the pre and post Civil War periods, the 1960’s Civil Rights Movement, and the Space Race.  Finally he walked the students through photos of several American cities and National Parks to depict the remarkable geographic and cultural diversity of the United States of America and its territories.