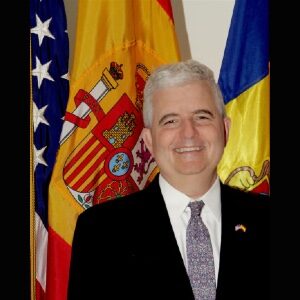 Mr. Tribble and his wife Christina Tribble, also a U.S. diplomat, have four children and a dog.  He holds a Bachelor’s degree in history from Loyola Marymount University in Los Angeles, a Master’s in international relations from the University of Southern California, and a Master’s in national security studies from the U.S. National War College.  Prior to joining the Foreign Service, he was an exchange student in Germany and a volunteer teacher in Honduras.  A lifelong singer and amateur musician, he is a member of the National Academy of Recording Arts and Sciences (the Grammy Association).  He is also a sports junkie; he plays baseball, basketball, and soccer, and has been an FC Bayern Munich fan for forty years, though he expects his new friends in Spain will twist his arm to cheer for their teams as well.  He is active on Twitter and speaks Spanish, German, French, and some Haitian Creole.