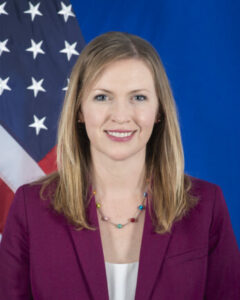 Katie Stana assumed the position of Consul General at the United States Consulate General in Barcelona (Spain) on January 5, 2022.  She most recently served as Deputy Assistant Secretary in the Bureau of Global Talent Management, with responsibility for the Department’s Locally Engaged Staff and Eligible Family Member employment issues, family member support, casualty assistance efforts, and the Department’s grievance framework.

Prior to this assignment, she was Chief of Staff to the Director General of the Foreign Service, supporting the Director General to impart executive leadership and oversight to the Department’s 76,000 employees. In Washington, Katie has served as a Line Officer, a Senior Watch Officer, Deputy Director of the Line, Director of the Line, and as an assessor on the Board of Examiners. She also did a Pearson Foreign Policy Fellowship in the office of Senator Chris Murphy.