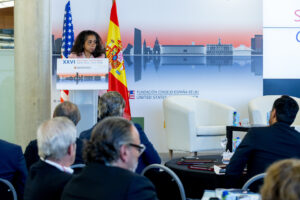 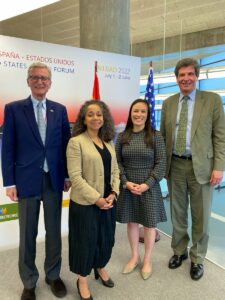 Bilbao hosted the XXVI edition of the US-Spain Council Forum, a meeting that brought together political, business, and civil society leaders to discuss three major issues: cooperation in security, transition to green finance, and transformation of cities. In her opening speech, Ambassador Julissa Reynoso stressed that “we have inaugurated a new era in our history, that was framed in the words of President Biden: “Spain is an indispensable ally”.

The Forum brought together more than 130 leaders from both countries: on the U.S. side, the Forum was attended by Under Secretary of State for Economic Affairs, Growth, Energy and Environment Jose W. Fernandez and Under Secretary of the Air Force Gina Ortiz. On the Spanish side, the Minister of Foreign Affairs, European Union and Cooperation, Jose Manuel Albares and the Spanish Ambassador to the U.S. Santiago Cabanas, also participated. Juan Lladó, President of the Spain – U.S. Council Foundation, and Joaquín Castro, Congressman and Honorary Chairman of the United States – Spain Council opened the two-day Forum.