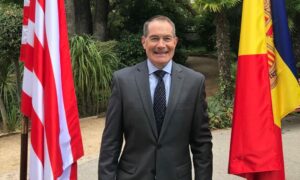 Consul General of the United States

The Catalan version of this article appeared in Diari d’Andorra on February 21, 2020.

On this day, February 21, 2020, we celebrate the 25th anniversary of diplomatic relations between the United States of America and the Principality of Andorra.  The United States recognized Andorra in 1995, after the adoption of the Constitution of 1993 that consolidated Andorra as a sovereign parliamentary democracy. The United States and Andorra are valued partners, with shared values and a friendship based in mutual respect and collaboration, a fact that has led us to enjoy an excellent relationship as these 25 years prove.

Our commitment to address common challenges in the international arena is visible in the United Nations and other international fora where both countries collaborate to advance our common agenda. Moreover, we work together in global affairs such as the promotion and protection of human rights, and of peace and prosperity within the framework of multilateral organizations.

Together, we have built a solid relationship expressed through bilateral agreements in the fields of education, security, and information exchange. The participation of Andorra in the Visa Waiver Program, which allows Andorran citizens to travel to the United States without a visa is only one example of this fruitful partnership.

We are mindful of the ambitious reforms carried out in Andorra in recent years, and of the progress made in Andorra’s fiscal and financial systems. Moreover, Andorra has promoted positive changes to liberalize its economy and provide a legal and appropriate framework for new investments that contribute to reinforcing the ties between our countries and that show how U.S. companies believe in Andorra’s potential.

It important to highlight Andorra’s commitment to technology and innovation to address the challenges of a constantly changing society.  In this context, Andorra has taken a step forward, supporting pioneering projects in the field of Smart Cities, sustainability, and Big Data.

And in the center are the people, the citizens that make up this society, a diverse Andorran society, tolerant, and inclusive.  In regard to all Andorrans, we support the improvements made in social issues, and we applaud the reforms in favor of women’s rights and of other vulnerable groups, and those against discrimination.

We must also highlight Andorra’s commitment to sustainability and the environment.  Andorra has known how to preserve its rich natural heritage, and throughout the years, continues attracting visitors to its mountains and valleys.  We trust we will be able to increase the number of tourists from the United States even further.  I know that when an American comes to Andorra, he does not want to leave!

Finally, Andorra and the United States share a strong commitment to their youth and their education. This year, we celebrate the 20th anniversary of the bilateral exchange program Fulbright, by which 15 Andorran college students have had the opportunity to pursue graduate studies in American universities, and more than 50 American students have come to Andorra to collaborate in the improvement of English learning in its schools.  The Fulbright Program’s educational exchanges are an essential part of our relationship, as they promote a better understanding of each other’s culture and society, and are undoubtedly, the basis on which to build the future of two countries that share a global agenda.

We have done many things together, but we still have many more to do.  We stand with Andorra, now and always, working to strengthen, even more, our fruitful relationship.