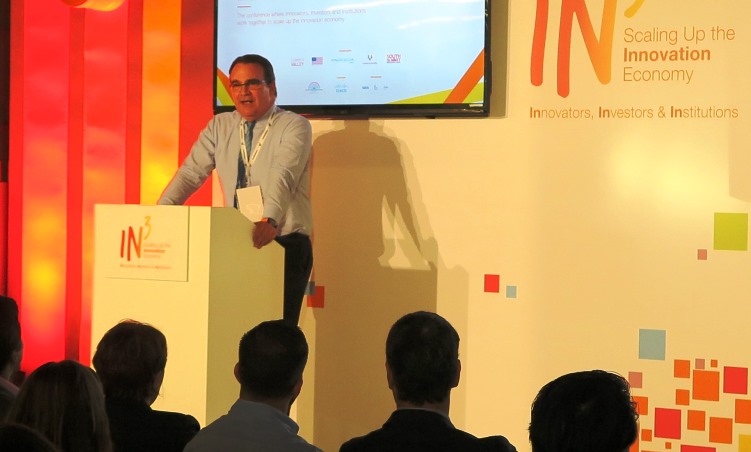 Many thanks, Elena.  And thank you to Miguel for the warm welcome.  Distinguished guests, entrepreneurs, investors, academics, representatives from the public and private sectors, it is both an honor and a pleasure to join you for the third annual IN-cubed conference.  The U.S. Embassy is proud to partner with Chamberí Valley, Endeavor Spain, South Summit, and The Venture City to put on this unique event that not only brings together innovators, investors, and institutions from a range of sectors, but also facilitates the one-on-one interactions that give nascent companies the tools they need to scale up, to break into international markets, to grow.

A special thank you to our sponsors, Cisco, BBVA, Capital Group, La Caixa, and Enagás.  Your generosity is perhaps the biggest vote of confidence in entrepreneurship as a driver of growth in Spain, and as a source of deeper economic ties between the United States and Spain.  Thank you and welcome to the participants from your companies here today.

Also, Endeavor’s Maria Gonzalez Picatoste deserves special recognition for her dedication to making today a reality.  Thank you, Maria, for being the backbone of today’s event.

Entrepreneurship—an engine of growth, technological innovation, and job creation—continues to be a priority for the United States, both at home in our own market, and abroad, including Spain where  we have strong economic ties, and where we see potential for deeper engagement.  One example of the Trump Administration’s commitment to continuing U.S. engagement in entrepreneurship world-wide is the continuation of the Global Entrepreneurship Summit – GES – which the United States and India will co-host in Hyderabad, India from November 28-30.  Focused on supporting women entrepreneurs and fostering economic growth globally, the 2017 GES will inspire innovative initiatives, forge new collaborations across countries, and increase economic opportunities, particularly for women, in support of the theme Women First, Prosperity for All.

Embassy Madrid is particularly pleased that IN3 was chosen as a “Road to GES” event, one of just two in Europe, along with Croatia.  This link to the White House-led GES elevates IN3 to a global audience, as today’s events will reach GES participants, alumni, and social media followers via live-tweets throughout the day.  At GES in November, key results and take-aways from today will receive special mention at the summit.  This affiliation for IN3 confirms the unique role today’s conference plays in Spain’s economy and its linkages with the world.

The bilateral economic relationship between the United States and Spain is one of the clearest beneficiaries of IN3.  As the United States government has worked increasingly on facilitating innovation economies and entrepreneurship, I’ve learned from representatives not just from Silicon Valley, but from the dozens of innovation clusters in the United States—like Boston, Charlotte, Silicon Alley in New York City, and the biotech hub in Maryland—that a key element of the secret sauce that makes an innovative ecosystem successful is an environment that fosters connections between entrepreneurs in the trenches.  This is the network for sharing successes, dusting off from failures, and building economies of scale.

I know many U.S. business leaders, serial entrepreneurs, academics, and even one NASA scientist have traveled from the United States to participate today.  They have come so far because they know precisely how valuable the relationships are that they—and all of you—will build here today.  As someone who tends daily to the relationship between Spain and the United States, I can tell you these ties run deeper than business.  You are further strengthening the strong economic ties across the Atlantic.

Spain is the fastest-growing and one of the most dynamic economies in Europe.  Spain not only exited its recession in 2014, it has now completed three years of solid growth, with the IMF and many private sector economists predicting Spain will surpass the government’s official forecast of  three percent growth for 2017.  Just as a start-up moves to scale-up, aiming to grow into international markets, now is the time for Spain to grow into a global economic powerhouse.  You know that Spain is a hot destination – and I don’t mean literally for its beaches – but for innovation and entrepreneurship.  It’s time the world heard that too.  IN3 and South Summit later this week will help get the word out.

We look forward to working with all the relevant players here in Spain to strengthen the ecosystem and further unleash the creativity of Spanish entrepreneurship in the future.

In closing, I applaud all of you here for the fascinating and job-creating work you are doing, and the ties you are creating between Spain, the United States, and indeed the world.  Thank you.