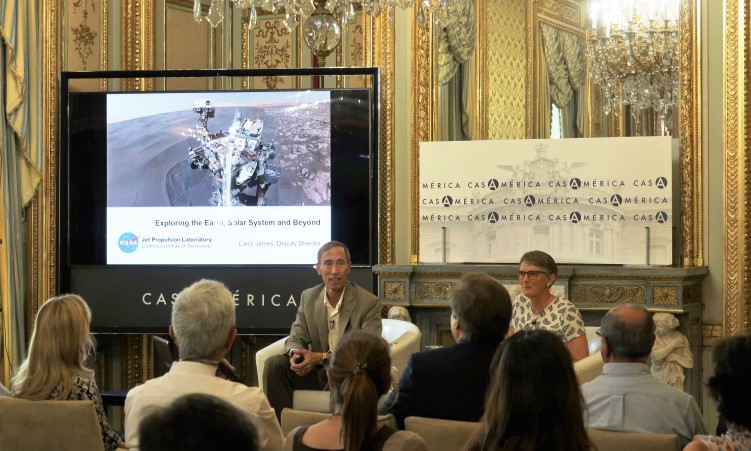 On Thursday, June 28th, Madrid’s Casa de America celebrated NASA’s 60th Anniversary with a presentation entitled “JPL-NASA’s Advances in Space Exploration and the Deep Space Network.” Counselor for Public Diplomacy Stewart Tuttle provided opening remarks about the popularity of NASA amongst the general public and told some personal anecdotes about growing up as a child not far from the jet propulsion laboratory in Southern California. He also noted that NASA’s anniversary coincides with the Fulbright program’s 60th year in Spain, making 2018 a special year for both organizations. Counselor Tuttle was followed by General Larry James, Deputy Director of the Jet Propulsion Laboratory (JPL) and Susan Dodd, JPL’s Director for the Interplanetary Network Directorate, experts who shared some of their research and vast experience through presentations and discussions with the crowd. The audience took particular interest in the discovery of water on other planets and space objects as well as possible commercial planetary missions. Dodd closed by noting Spain’s important role in the NASA Deep Space Network; Robledo houses one of three large antennas used by NASA and JPL to research the galaxy and transmit information. Dodd told the Spaniards gathered at the event to be proud of their contribution. “You are providing science to the world,” she said. For more information about the topics discussed, feel free to check out our Twitter feed @USembassyMadrid to view live tweets from the event.