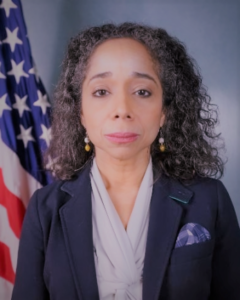 Julissa Reynoso Pantaleon was born in the Dominican Republic and emigrated to the United States in 1982, where she grew up in New York City.  Before being nominated and confirmed as U.S. Ambassador to Spain and Andorra, she served as an Assistant to the President and Chief of Staff to Dr. Jill Biden, and as the Co-Chair of the Gender Policy Council at the White House.  During the Administration of President Barack Obama, she served as Deputy Assistant Secretary of State in the Bureau of Western Hemisphere Affairs and then as U.S. Ambassador to Uruguay from 2012 to 2014.

Prior to joining the Biden Administration, Ambassador Reynoso was a partner at the international law firm of Winston and Strawn in New York.  She has served on the faculty of Columbia University School of Law and the School of International and Public Affairs, and she is a member of the Council on Foreign Relations, the American Law Institute, and the Inter-American Dialogue.  She is widely published in English and Spanish on an array of issues including comparative law, regulatory reform, community organizing, immigration policy, and Latin American politics for both popular press and academic journals.  She received her Bachelor’s degree in Government from Harvard University, a Masters in Philosophy from the University of Cambridge in the United Kingdom, and her law degree from Columbia University School of Law.

Ambassador Reynoso is joined in Madrid by her son Lucas and two dogs named Celeste and Kika.  She is a music aficionado, especially fond of jazz, soul, classical music, boleros, rancheras, salsa, and merengue. She is an avid follower of theater and the visual arts.