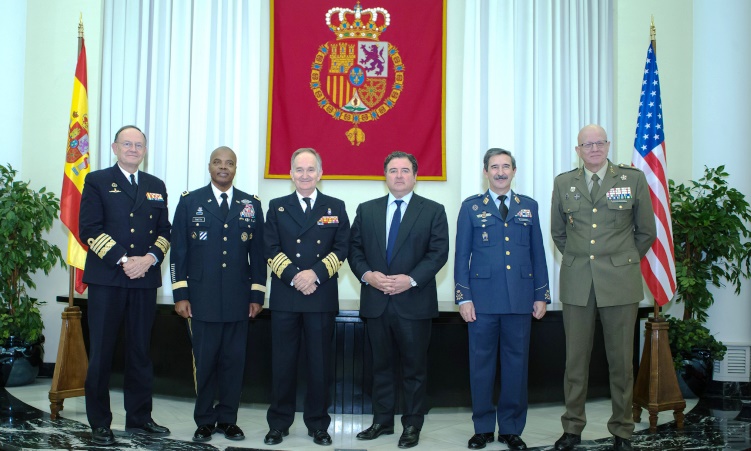 A Toast to the U.S.-Spain Military Alliance

Thirty years ago today, in 1988, Spain and the United States signed our Agreement on Defense Cooperation.  This agreement governs the presence of U.S. forces on Spanish bases, consolidating the naval base in Rota and the air base in Moron de la Frontera as critical support nodes for Spanish, NATO and United States forces. We thank Spain every day for this invitation to work in its territory. For 30 years, we have recognized the privilege that Spain has granted us.

Under the agreement, tens of thousands of American sailors and aviators have served shoulder to shoulder with their Spanish colleagues. The friendships born out of this hard work and dedication are at the heart of our defense relationship today.  Throughout these years, U.S. and Spanish military personnel in Moron de la Frontera and Rota have trained together in allied missions around the world.  From the Fair of Seville to the Carnivals of Cadiz, U.S. service members have also enjoyed the extraordinary culture and hospitality of Andalusia.  Today, 7,000 U.S. military personnel and their family members in Spain generate 260 million euros and 4,800 Spanish jobs each year for the Andalusian economy.

The world has changed greatly since the signing of the agreement. I lived in Spain for the first time a few years before the agreement was signed, and I fell in love with this country and its people. Europe was still living under the shadow of the Cold War.  The Berlin Wall divided East and West. Spain had just entered the EU, and the group only included 12 member states. In 1988, Spain spent more than two percent of its GDP on defense. That investment spurred the growth of the Spanish defense industry, generated jobs and fueled technological innovation that also benefited other industries.

Today a tailwind lifts our military alliance. Over the last three decades, our defense cooperation has evolved and adapted to the changing security environment.  After the collapse of the Soviet Union, we opened NATO to the new democracies in Central and Eastern Europe. Together, as allies, we also confronted the atrocities in Bosnia to achieve a long-term peace plan. Following the attacks of September 11, 2001, we deployed together in Afghanistan to build a better future for the Afghan people.

Under the agreement, Spain welcomed four U.S. Navy destroyers to Rota in response to the growing ballistic missile threat in Europe, and a rotational force of Marines deployed to Moron de la Frontera to improve security conditions in Africa.  Over the last four years, Spain and the U.S have been members of the global coalition to defeat ISIS that has liberated 99 percent of territory in Iraq and Syria from this terrorist group.  We also fight on the same side against hybrid threats, including cyber-attacks.

As allies and friends, the United States and Spain have accomplished extraordinary things in the defense of our common values. I have been able to verify this over decades of business travel to this country. My family and I have commented to our Spanish partners and friends about Spain’s extraordinary progress and the closeness it has forged with the U.S. Today the people of both countries enjoy greater security and prosperity.  One fact says it all: Spanish GDP per capita has tripled since 1988.

However, we must recognize the challenging security environment we confront today. From Russia’s aggression in Ukraine and the Black Sea to Iranian missile proliferation, from the continued menace posed by terrorist groups to the security threats in the cyber domain. The risks we face are real and are growing in scale and complexity.

To continue our success we must maintain the same forward-looking strategic vision that guided the signatories of the agreement.  Good things do not come cheap.  Nearly thirty years have passed since Spain last invested two percent of its GDP in defense. At this summer’s NATO summit in Brussels, Spain recommitted to regain this level of investment.  It is important to do so. We recognize that the security challenges of tomorrow require a greater resolve today from all nations committed to protect the international order and the rule of law.  Without security, there is no prosperity. I strongly believe that economic prosperity solves many social problems.  Increased investment in defense generates jobs in strategic sectors while enabling more investment in local communities.

And lest we forget, Spain helped the United States during its birth and growth as a nation. Today in the United States, we still feel the unique contribution of the Spanish character to the American way of life. The Spanish footprint in the U.S. is real, and it runs deep.

Almost forty years after my first stay in Spain, I feel at home here, as do our armed forces; they understand how this longstanding and deep defense cooperation unites our two countries even further.

We applaud the commitment of the Spanish government and thank Spain for the extraordinary hospitality shown to our military forces over the last 30 years.  But more than that, we are allies and friends, partners today and forever. Spain lives with us and is part of us.

Let me raise a toast to the next 30 years of military cooperation between the United States and Spain.